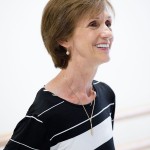 We are sad to announce that our Director, Gailene Stock CBE AM, passed away peacefully today after a courageous battle with cancer.

Born in Ballarat, Victoria, Gailene trained initially in Australia and then at The Royal Ballet Upper School as a result of a scholarship awarded by the Royal Academy of Dance. She danced as a Principal Artist with The Australian Ballet, the National Ballet of Canada and the Royal Winnipeg Ballet, performing many of the leading roles in the major classics and also many dramatic works.

Following a sixteen year professional dancing career, she accepted the position of Director of the National Theatre Ballet School, Victoria, Australia for eight years and The Australian Ballet School for nine years, before taking on the role of Director of The Royal Ballet School in 1999. Gailene led the School and its artistic development for 15 years and it is now widely recognised as one of the top classical dance training centres in the world.

In 1997 Gailene was awarded the Order of Australia for services to ballet. She received the Governors of The Royal Ballet Gold Medal 2013.  Internationally acclaimed, her knowledge and experience was regularly sought in the dance community worldwide. She participated as a jury member in many international competitions including the role of President of the Prix de Lausanne, Switzerland, and the Youth America Grand Prix, New York.

‘Gailene’s strong leadership and drive over the past 15 years has impacted hugely on the School’s international success and reputation. She will be greatly missed by everyone connected with the ballet world.’

The Marchioness of Douro OBE, Chairman of the Board of Governors, The Royal Ballet School

‘Gailene Stock has made an extraordinary contribution to dance. Her talent, drive and determination, first as a ballerina and subsequently as a much admired teacher, led her finally to her post as Director of our own Royal Ballet School, a position she has held since 1999. Under her direction the School has gone from strength to strength and on behalf of The Royal Ballet, and in particular all of its dancers who were former students of hers, I salute all that she has achieved for them and for the dance world as a whole.’

Our thoughts are with Gailene’s family at this difficult time.