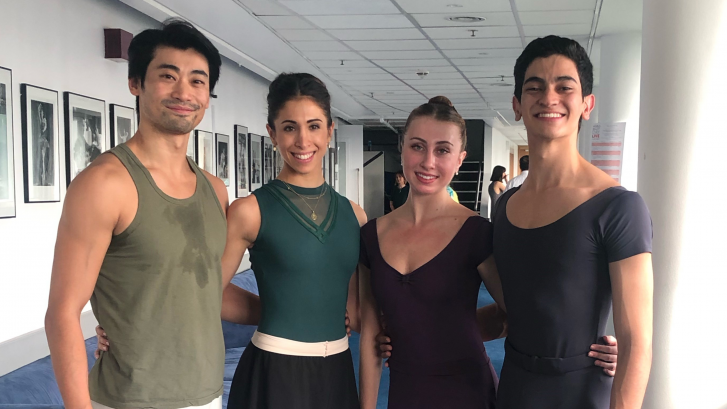 Maddison said ‘Yasmin and Ryoichi are so amazing and they have so much experience so sharing it with us today has been incredible.’ Alumna Yasmin, who danced the Concerto – Second Movement pas de deux in her final year at the School, followed by saying ’to be passing down everything we have learnt to Maddison and Denilson is very meaningful for me.’

The live stream from the Royal Opera House started with company class, and then viewers saw a rehearsal of Coppélia, a rehearsal of The Rose Adage from The Sleeping Beauty and more. There were also many Royal Ballet School alumni featured during the live stream, including Francesca Hayward, William Bracewell, Matthew Ball, Marcelino Sambé and James Hay who were all interviewed about their roles in the forthcoming Romeo and Juliet film.

World Ballet Day was a 20-hour live stream from The Royal Ballet, The Australian Ballet and Bolshoi Ballet and supported by guest companies from across the world. The live stream provided viewers the exclusive opportunity to see inside classes and rehearsal rooms as well as watch interviews with world renowned dancers and choreographers.

One thought on “Celebrating #WorldBalletDay”