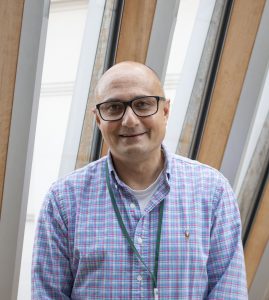 David Gajadharsingh did his first degree in Aeronautical Engineering and then went on to study for his PGCE at Oxford University. He started his teaching career at Peers School in Blackbird Leys, Oxford.

He left teaching for a brief sojourn with Glaxo Pharmaceuticals in their sales and marketing department before returning to the profession with Collingham Tutorial College in London in 1990.

He was appointed as a Physics teacher and Head of Year at Aylesbury Grammar school in 1991. In 1997 he secured the post of Head of Physics at Millfield School in Somerset and while in post was also asked to take on the role as Head of Year (Sixth Form), in which he was responsible for the academic and pastoral welfare of some 340 students.

David was appointed as Deputy Headmaster of King Edward VI Grammar School in Stratford-upon-Avon in 2003. During his time at KES, Stratford, David was responsible for both the pastoral and academic dimensions of the school. David took up the post of Headmaster of Bedstone College in Shropshire in 2011 and joined the Royal Ballet School in April 2019.

David has always been involved in playing and teaching sport and has gained county, national and international honours in fencing. At Oxford he was awarded a fencing ‘Blue’ and he has run clubs in fencing, football, basketball, badminton, table tennis and cricket during his teaching career.

David was born in Trinidad and Tobago. At the age of three his family left the Caribbean island. They moved first to Dublin, (his mother is Irish), and then on to London where he attended Burlington Danes Comprehensive School in Shepherd’s Bush. David joined The Royal Ballet School as Academic and Pastoral Principal in 2019. David is married to Gabi and they have two daughters.